Yoga and a Map of Malt Whiskies – Beata Błaszczyk 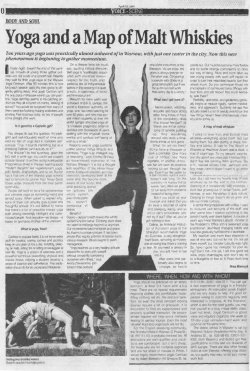 Ten years ago yoga was practically almost unheard of in Warsaw, with just one center in the city. Now this new phenomenon is beginning to gather momentum.

Friday night, toward the end of the carnival, crowds of young Poles gather outside – no, not a pub or a concert hall. Patiently they wait for their yoga class at the Warsaw Joga! Centrum. After 90 minutes (this is how long each session lasts) the next group is diligently getting ready. And Joga! Centrum isn`t the only place in Warsaw where you can practice. Yoga definietly seems to be catching on. And are they all a bunch of cranks, reeking of spices? You would be surprised how many of them leave the building holding briefcases and sporting their business suits, as lots of people come straight after work.

Is it good for a Catholic girl?

Yes, people do ask this question . An intelligent and well-educated friend of mine who read my text on yoga said in complete seriousness: ‘True, it sounds interesting, but as a practicing Catholic can I actually do it?’.

This shouldn`t be that surprising, given the fact that a while ago you could see posters outsite several churches along Krakowskie Przedmieście Street in Warsaw warning about ‘modern dangers’ like vegetarianism, yoga, judo, karate, acupuncture, and so on. Rumor has it that one of the Warsaw yoga schools had to remove its banner from Nowy Świat Street under pressure from the local parish community.

People still tend to be a bit apprehensive and perceive yoga as something weird and almost scary. When asked to explain why, none of them can actually give a clear and thoughtful answer. It`s not difficult to notice that there`s a lot of prejudice toward yoga even among seemingly intelligent and openminded people. And prejudice – as always – is based on ignorance and fear of the unknown.

What is yoga, then?

Contrary to popular belief, it is not some weird stuff for mystics, cranks, loonies and ascetics living on one grain of rice a day, levitating, sleeping on nails, eating fire or sitting cross-legged all their life. Yoga is a system of exercises and a powerful technique preventing physical and mental illness, helping a student develop a sense of balance and self-reliance. This explanation should do for an unprepared Westerner.

On a deeper level we could say, quoting Yehudi Menuhin, that yoga is ‘inextricably associated with universal laws – respect for life, truth and patience are all indispensable factors in the drawing of a quiet breath, in calmness of mind and firmness of will.’

Menuhin for many years was a student of B.K.S. Iyengar, the world`s foremost authority on yoga, who has been teaching for over 60 years, and who has several million students all over the world. Iyengar describes yoga as ‘a timeless pragmatic science evolved over thousands of years dealing with the physical, moral, mentel and spiritual well-being of man as whole.’

Keeping various yoga positions (called asanas) brings tenacity and calmness. ‘Yoga is an intelligent way of exercising’ saya Cristina Bnińska, an experienced instructor at the Warsaw Sheraton. It is not a thoughtless repetition of the same movements. It requires precision and concentration, developing them at the same time. We become more aware of our body, and while practicing asanas we activate the whole system, even those parts we weren`t conscious of before.

Benefits? Galore – deeper breath makes the whole system function better. Climbing stairs does not seem a challenge beyond us anymore. Our movements become lighter and graceful, thanks to proper posture. It has been proven that regular practice of asanas cures various diseases. Stress begins to seem managedable.

‘Yoga teaches us a very healthy attitute toward life, to work with oneself, without constantly comparing ourselves with others’ says Iwona Zawieśnicka, (pictured in the tree posture) one of the instructors at the Sheraton. ‘As we know, the grass is always greener on the other side. Comparing ourselves with others is a great temptation, but if we focus on our work then every day is a victory.’

What can I get from it?

Nervousness, irritability, shoulder and back aches (after long hours in front of the computer) – does this sound familiar? All these are initial symptoms of tension building up. And wandering around with such a time bomb inside us isn`t good.

What do we do then? Some have a massage or take a painkiller. One more cup of coffee, one more cigarette, or another chocolate bar are seen as solutions helping us get through the day. Even if we feel better for a few minutes, such a boost doesn`t last long. On the contrary – it makes things worse. Very often we prefer to run away from problems instead of facing them.

But if you pluck up your courtage and admit that you do have a disorder of some kind (sleeping, eating and so one) or can`t concentrate, why not try it out? After all, you`ve got nothing to lose.

Celena, an American instructor of Kundalini yoga at the Sheraton recommends ‘Yoga for Dummies’, a very straightforward book, removing all mystery and showing that there`s nothing to fear. All you need is already in you, youjust have to tap into it.

After some time personality also begins to change, as Iwona points out. Our muscles become more flexible and by some strange coincidence so does our way of being. More and more often we see young people with such stiff necks – in order to turn their head they have to turn their whole trunk. Do you remember those old photographs of communist party officials with their thick and stiff necks? Not much flexibility, was there?

Flexibility, openness and gentleness gradually begins to replace rigidity, narrow-mindedness and aggression. Suddenly we see that actually there`s a lot of beauty around us and new things haven`t been mischievously created just to annoy us.

A map of malt whiskies

I used to love Irish and Scotch malt whiskies – everything about them. Not just tasting them, but also staring at maps, bottles and labels. A visit to The World of Whiskies at Heathrow Airport was a must, a kind of pilgrimage. To my genuine surprise, one day about two years ago I realized that I didn`t feel like drinking them anymore. Six p.m., sacred whisky time, Jameson with fizzy water – and it doesn`t want to go down the throat.

Several additional attempts proved equally futile. But I still have my favorite map of malt whiskies up on the wall in the kitchen. Glancing at it occasionally with nostalgia, I think that growing out of certain habits, preferences, or even friendships is quite natural. Clinging to things doesn`t let us grow and kills our innate curiosity.

A similar thing happened with coffee. I used to consume vast amounds of the stuff, and after some time I started swiching to tea (which I hardly ever drank before). A couple of years ago I read Barbara Labuda, minister at the President`s Office and a seasoned yoga practitioner, described changing habits and how she gradually had become a teetotaler.

My reaction was more than skeptical – it was all very well, but not for me. I`m not yet there myself, but minister Labuda was right. So, have I gone too monastic for your liking? Don`t fret – not yet. I still love good red wine, enjoy champagne, and won`t say no to Margarita or two at El Popo from time to time.

Where, when, how and with whom?

Yoga should be practiced on an empty stomach, at least 3-4 hours after a big meal. There are no special requirements regarding clothes, any comfortable, loosefitting clothing will do. We practice barefoot. As even the most innocent looking asanas require a lot of precision, it is important to find an experienced and properly qualified instructor. An experienced teacher will help avoid mistakes leading to serious injuries. Even the most detailed illustrated yoga book will not do. 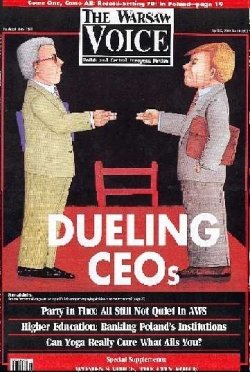 For the English speaking community, the Sheraton Hotel in Warsaw is probably the best bet. All instructors are well-qualified and conditions are comfortable, but it isn`t cheap. For those who are not complere begginers and are not afraid of classes in Polish, I would highly recommend Joga! Centrum run by Adam Bielewicz. You can get a real experience of yoga in a friendly athmosphere. All instructors speak English and are very happy to help. It`s good for people willing to practice regularly and interested in progress. At the Sheraton, which is also for the hotel guests, you mind find yourself in a truly mixed-ability class. Last not least, Joga! Centrum is good value and regularly organizes one-week or 10-day yoga retreats – hard work and good fun at the same time.

The oldest school in Warsaw is run by Sławomir Bubicz. Both Bielewicz and Bubicz got their qualifications in India and are students of B.K.S. Iyengar. There are also other fitness clubs all over Warsaw, offering yoga classes, but quality may vary, so do your homework first.